Large panels (2.5m x up to 3m high) of the Polarwall Insulating Concrete Formwork are assembled either offsite or in a temporary assembly facility which can be allocated near to or at the site.

If there is a crane on site then the panels can be “gang formed” together in lengths of up to 12.5 metres and lifted into location.

Reinforcement can be incorporated into the panel assembly making it ideal for basement construction and retaining walls.

A new internal walling system from Polarwall is also being used. This uses cement fibreboard panels as permanent shuttering and will create a wall which is virtually finished.

A new site has opened in Slough where this revolutionary build method will be showcased to any interested parties.

As part of the Flying Factory concept this project will have its own concrete batching facility on site for filling the assembled Polarwall formwork and for the floors.

The Slough project has 80 apartments, retail space and underground car parking. The contractor M2 Construction is aiming for a fast build construction with a target time of 2 weeks for each floor.

Contractor Andrew Skinner says that “Using the large panels is a very exciting development for us. We have used the Polarwall formwork almost exclusively for the last three years. It is already a very impressive construction material and provides structures that comfortably exceed all Building Regs requirements both in terms of thermal performances and structural strength. Now, by using the large panel assembly we have moved this up a gear and the build speeds are becoming incredibly quick.”

Polarwall Technical Director Alan Wheeler said “The pre-assembled panels are now getting lots of attention from larger contractors who are primarily interested in two things – the use of less-skilled labour in the build and also the high build speeds that can be achieved. The panel system lends itself to larger projects such as light commercial, schools, apartment blocks and multi-unit developments. One contractor is particularly interested in using our products in association with timber frame where we would provide the high strength structure in the lower stories and timber frame would be used on the upper stories.”

The site will be having open days for interested parties who should in the first instance contact Polarwall (01392 823300 www.polarwall.co.uk) to arrange. 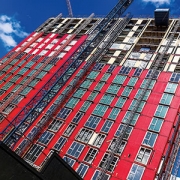 The importance of Heat Air Moisture Management in DfMA

VIDEO: The first residential house has been printed!
0 replies

Senco: one of the best brands in the world of fastening technology
Scroll to top