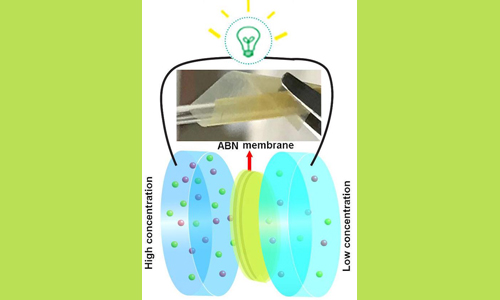 Considering all of the water in the oceans of the Earth, it’s no surprise that researchers the world over are hammering away at the challenge of extracting renewable energy from the sea. Now a team based in Australia has come up with a solution that leverages osmotic pressure to do the trick. In an odd twist, recycled Kevlar could also come into play.

For those of you new to the topic, osmosis refers to the passage of water through a membrane. The electricity angle comes in with the seawater.

Think salt and ions, and you’re on the right track.

If sea water is separated from fresh water by a membrane, the two sides will seek a balance. That puts pressure on the membrane, and pressure can be converted to energy.

That sounds simple enough, but the devil is in the details. The Australian team, based at the Institute for Frontier Materials at Deaking University, explains that osmotic membranes “must combine high mechanical properties with high surface charge, nanochannel density, scalability of production, and environmental resilience.”

Researchers have been messing around with osmotic pressure to generate electricity since at least the 1970s, but much of their work stayed in the lab.

The potential for commercial application has begun to pick up in recent years, thanks in part to advances in fabrication methods that enable researchers to assemble new materials at the nanoscale.

The Australian project is a good example of how quickly the field of osmotic energy (aka osmotic power or “blue” energy) could accelerate from here on out.

The team was inspired by osmotic activity in the human body. In particular, the researchers took note of the strong-weak contrast between bone and soft tissue, coupled with the contrast in their ability to transport ions.

Bone is very strong, so a new material based on bone structure could make a strong membrane. Unfortunately, bone is very bad at transporting ions.

Soft tissues like cartilage and kidney membranes are very good at transporting ions, but their structure would make for a very weak membrane.

The solution was to create a composite membrane using nanoscale layers of each material. The research team chose fibers of aramid to stand in for soft tissue, and boron nitride platelets for bone.

If you caught that thing about boron nitride, that’s important in terms of the commercial success of the new membrane because it is relatively cheap.

Boron nitride platelets form a powdery substance that is widely used to control heat in consumer electronics, batteries, and many other applications.

The aramid angle is even more interesting. Aramid refers to the kind of synthetic fibers that go into making Kevlar vests and other high performance gear.

Aramid recycling is already a thing, and the team anticipates that the use of recycled aramid fibers in their new membrane will also help keep costs under control.

More Renewable Energy From The Ocean

For complete details on the new membrane you can look up the study, titled “Bioinspired Nanocomposite Membranes for Osmotic Energy Harvesting,” in the journal Joule.

For those of you on the go, one of the key findings is that the new membrane demonstrates “high stiffness and tensile strength even when exposed to repeated pressure drops and salinity gradients.”

The new membrane also displays promise in the areas of power density and range of temperatures:

The team still has some work to do in terms of optimizing the performance, so don’t look for that new membrane on the shelves of your local hardware store any time soon.

The important thing is that osmotic systems expand the range of options for harvesting energy from the ocean — as opposed to, say, drilling into the ocean bed for oil and natural gas.

Offshore wind turbines are already firmly established in the renewable energy marketplace, and floating wind turbines are coming up fast. Wave energy and tidal energy devices are also in play, and the US Department of Energy is hot on the trail of other emerging forms of ocean energy.

Meanwhile, Stadkraft has an osmotic energy facility in operation since 2009. CleanTechnica is reaching out to the company for an update, so stay tuned for more on that score.

AIR QUALITY – Bringing the Outside Inside
Scroll to top