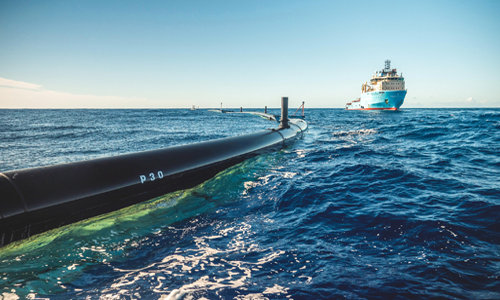 We read this article on Dezeen, it seems to have split the environmentalists in terms of for and against, whilst the general tone of the article seems to focus on negative aspects, some of their reader responses were more positive. We wondered what Buildingspecifier readers viewpoint was on the subject.

Dutch non-profit The Ocean Cleanup plans to burn some of the plastic it collects from the Pacific Ocean, Dezeen has learned. Designers and environmentalists say the move “makes no sense”.

The organisation told Dezeen that most of the plastic it harvests with its floating rigs will be recycled, with the remainder burned in waste-to-power plants.

“Not all plastics collected will be recyclable to new products, but the majority will,” said a spokesperson for The Ocean Cleanup.

“The particles collected that are not fit to be turned into new products will be thermally recycled into energy,” the spokesperson said. “We aim to send nothing to landfill.”

The spokesperson did not give any other details of where or how the ocean plastic it collects would be recycled or burned.

However there are concerns over the emissions from such facilities, which can potentially release toxins into the atmosphere as well as carbon dioxide.

A report on plastic pollution by the Center for International Environmental Law (CIEL) published earlier this year said that incinerating plastic waste “releases toxic substances including heavy metals such as lead and mercury, acid gases and particulate matter.”

Dutch designer Dave Hakkens, founder of recycling network Precious Plastic, said he admired The Ocean Cleanup but was “not a big fan of burning plastic for energy”.

“This seems like such a waste of material to me,” said Hakkens. “It took so much effort to turn that old fossil oil into plastic. We can always burn, but we can do more before we hit that last resort.”

“It is just a strategy that displaces trash with smaller molecules that float around in the air,” said architect Arthur Huang.

“We’re not a fan of burning,” said Cyrill Gutsch, founder of Parley for the Oceans. “Is it not what at this point we feel is recommended.” Cristina Gabetti described the project as “a dream that seduced many”

Italian environmental journalist Cristina Gabetti said The Ocean Cleanup’s claim that the majority of the plastic would be recycled sounded “very optimistic”.

“Where will they bring the collected plastic waste to?” she asked. “Do they have agreements with recycling plants? Have they done an assessment of the environmental impact of transport and treatment of the plastic?”

She added: “Waste-to-energy is a common practice in some states, but again the type of facility makes the difference.”

“Burning plastic collected from the ocean helps as it removes material that could break down into micro plastics, but if the goal is [reducing] carbon emissions then burning it makes no sense,” added architect Arthur Mamou-Mani, who is exploring the use of compostable bioplastics to replace fossil-fuel plastics.

“Burning plastic for energy is not dissimilar to burning oil, but creates additional carbon emissions to the ones generated by creating the plastics in the first place,” he continued.

Founded in 2013 by Dutch entrepreneur Boyan Slat at the very young age of 20, the Ocean Cleanup says it plans to remove 90 per cent of plastic waste from the world’s oceans using fleets of 600-metre-long floating rigs. 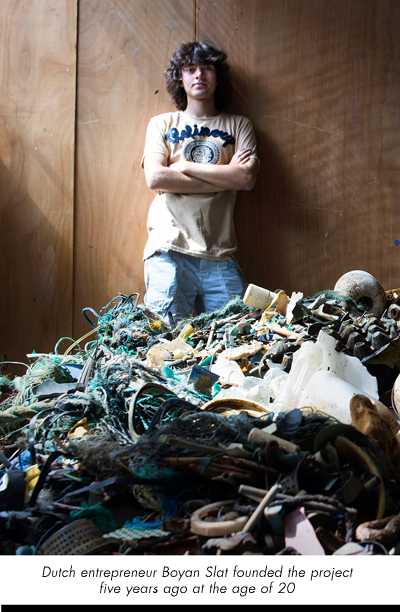 The unmanned devices are designed to scoop up plastic as they float around the so-called Great Pacific Garbage Patch, where billions of plastic particles have accumulated. Ships will arrive periodically to take the waste ashore.

However there are doubts over the feasibility of the operation, since much of the plastic in the garbage patch has broken down to the size of confetti, with most of it found below the surface and in low concentrations.

As well as being difficult to collect, this plastic is difficult and expensive to recycle. In an interview with Dezeen published earlier this month, Parley for the Oceans’ Gutsch said that recycled plastic from the ocean can cost eight to ten times more than virgin plastic, and was often contaminated.

“It works like a sponge and it absorbs a lot of other chemicals,” Gutsch said. “So in a treatment process, you want to be very careful. You can compact them into building blocks or something like that, but that’s actually downcycling.”

In the interview Gutsch, whose organisation turns marine plastic waste into desirable goods under the Ocean Plastic brand, said he did not think it was possible to rid the oceans of plastic. Instead, he called for the development of new materials to replace plastic.

Many experts are sceptical of The Ocean Cleanup’s approach. Speaking to Dezeen earlier this year Huang said The Ocean Cleanup “cannot be a plausible solution” to cleaning up the oceans while Gabetti described it as  “a dream that seduced many people”.

Engineers later discovered that the rig was moving more slowly than the plastic it was trying to collect, causing waste it had collected to float back into the sea.

The mission was restarted in June following modifications to the rig. In a blog post published on 16 August, Boyan Slat announced that the organisation had solved the speed problem by rotating the rig 180 degrees and slowing it down with a parachute, so that plastic is pushed into the system by wind and waves.

However the rig requires further modifications to ensure that all floating plastic is captured. “This is all good news and a key step in the right direction; however, we are not at proven technology status just yet,” Slat wrote.

CIEL’s report, Plastic & Climate: The Hidden Costs of a Plastic Planet, was published in May this year. It found that producing and incinerating plastic “will add more than 850 million metric tons of greenhouse gases to the atmosphere – equal to the emissions from 189 five-hundred-megawatt coal power plants” in 2019.

Pollution from burning plastic at waste-to-energy plants “can enter air, water, and soil causing both direct and indirect health risks for workers and nearby communities,” the report found.

An estimated 4.8 to 12.7 million tonnes of plastic end up in the oceans each year. Circular-economy charity the Ellen MacArthur Foundation estimates that by 2050 there will be more plastic than fish in the oceans.

RINNAI CELEBRATES ITS FIRST 100 YEARS OF MANUFACTURING PRODUCTS TO SERVE ITS...

Retrofitting empty homes can save lives
Scroll to top