All News
You are here: Home1 / All News2 / General News3 / FROM VINE TO BOARD – SUSTAINABLY

Agriculture, one of Australia’s most important industries, produces millions of tons of plant and crop waste each year.

Despite the abundance of this waste, there are very few ways to recycle such a massive amount of material, with most of it typically going back into the soil or being burned. Both of these processes release large amounts of greenhouse gases into the environment.

So, finding ways to reuse and recycle this crop waste is imperative in a future where there’s increased competition for resources. It also enables us to simultaneously boost the economy and help the environment.

Our breakthrough research from the Department of Chemical Engineering’s Ellis Research Group led by Professor Amanda Ellis, shows how these waste materials, including grapevine prunings – an unwanted yet common type of crop waste – can be made into useful building materials. 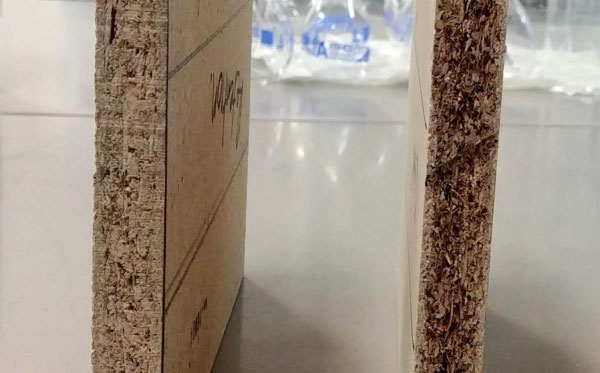 Particleboard is a staple of the construction industry, produced industrially at an enormous scale by mixing wood chips with an adhesive resin.

This mixture is then pressed under high temperatures to form a solid board – resulting in a cheap and durable product that is often used in materials ranging from flooring to furniture.

As the human population increases worldwide, the global demand for particleboard is growing rapidly and the need for woodchip is rapidly outstripping supply.

Particleboard’s niche within the construction industry is a result of the fact that it’s commonly produced from post-industrial recycled waste wood and sold at a correspondingly low price – but the increasing demand and cost of production are rapidly making it less attractive.

By making particleboard from another low-cost source, we would ensure the viability of the industry, and the future of an environmentally-friendly building material.

It is at the nexus of this challenge of excessive agricultural waste and particleboard’s rapid price hike that our team, in the Department of Chemical Engineering, found a potential answer.

FROM WASTE TO RESOURCE

These are the stems and branches that are cut off grapevines before and after harvest.

Grapes are grown almost everywhere but importantly, in countries like China, the United States, Australia, France, and Spain – which are all major particleboard producers as well.

Our research, published in Waste Management, investigated the use of grapevine prunings in particleboard.

Our team used locally sourced grapevines from a winery in regional Victoria, while the ARC Training Centre for Chemical Industries provided an industrial contact to make and test the particleboard.

The grapevine was easily milled into chips using existing equipment and mixed with softwood chips and resin to make hybrid grapevine-softwood particleboards.

By adding as little as 10 per cent grapevines into the particleboard, the boards exceeded all industry strength and durability standards, without changing any aspect of the existing process.

While 10 per cent doesn’t sound like a lot, the scale of particleboard production globally means that even replacing as little as this much of the soft woodchips relieves the pressure on supply while also reducing grapevine waste.

In fact, substituting 10 per cent of softwood for grapevine in Australian particleboard production alone could reduce the demand for wood by tens of thousands of tonnes annually.

From an industrial perspective, these considerations are important as they enable a switch to more sustainable materials without needing to alter the strength, durability and reliability of their products.

The next steps in our research involve running a pilot trial of grapevine particleboards in a factory and conducting a business case analysis to determine the overall cost of replacing wood with grapevine.

But our findings have the potential to not only reduce the amount of pollution from crop waste disposal, but to also ensure particleboard can remain a cheap, staple construction material into the next century.

This work has been financially supported through the ARC Training Centre for Chemical Industries.

Market bill could increase the risk of another Grenfell