All News
You are here: Home1 / All News2 / General News3 / Bounce back loans, the cost

Buildingspecifier found this blog from The Business Rescue Expert thought provoking.  We present it to our readers and ask the question, ‘Has the Bounce Back Loans Scheme (BBLS) succeeded in preserving the vibrancy of commerce and in particular the construction sector?’. We would welcome your comments.

Construction industry could cost the Treasury £4.2bn in BBLS defaults

We found several official projections indicating that billions of pounds lent under the scheme would ultimately not be repaid, with the losses equal to the cost of building between 6 and 23 Wembley Stadiums from new.

In this blog, we’ll be focusing more closely on how small businesses in their individual industry sectors have embraced the scheme – how much has been borrowed, by whom and what the recipients have done with the funds.

The data sources used to compile the various best and worst-case scenarios used in the projections are taken from the Office of Budget Responsibility’s Fiscal Sustainability Report; the latest BEIS annual report and the National Audit Office (NAO)’s regularly updated COVID-19 cost tracker.

The industry lending breakdowns were compiled and published by the British Business Bank.

Using this public data as our benchmark, we projected three different scenarios for defaults as outlined within them.

We’ve taken a look at the total amount each sector has collectively borrowed under the bounce back loan scheme, the overall number of loans taken out, the average amount borrowed by a company in that sector and the default projections based on our analysis. 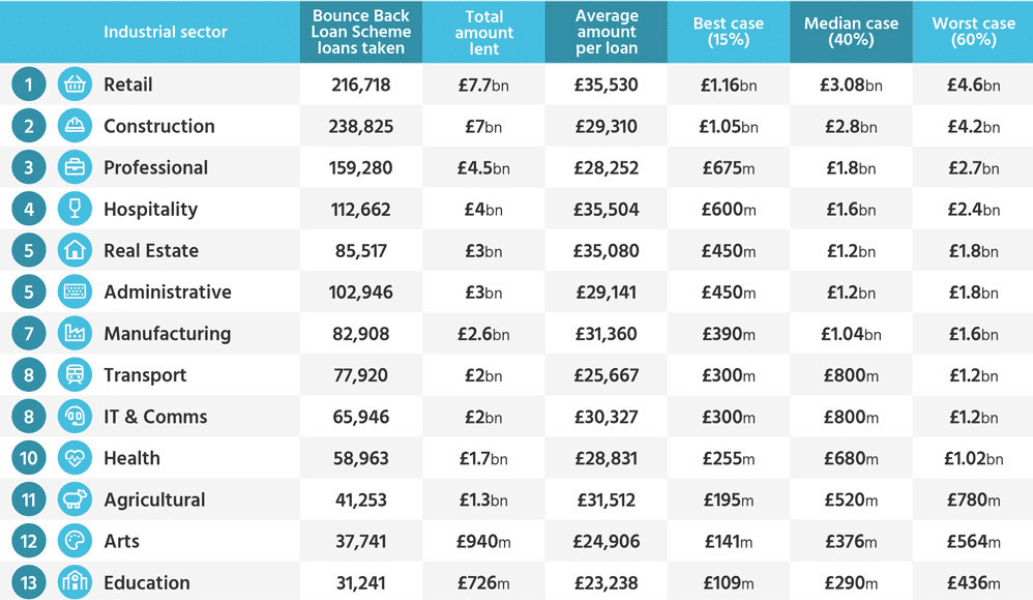 We can see that retail businesses – which include high street shops, shopping mall tenants and independent stores – borrowed a collective £7.7 billion which is higher than any other comparable sector.  Not unexpected as non-essential retail stores have only been allowed to reopen in the past week so have had less opportunity to trade offline, if they’ve traded at all.

If businesses in this sector fail at the rate officially expected then we can see bounce back loan default losses ranging from £1.16 billion up to a high estimate of £4.6 billion.

Builders, fitters and other construction industry businesses are the next highest borrowing sector obtaining a collective £7 billion through the BBLS although this sector also saw the most individual loans taken out with over 238,000 bounce back loans being supplied to the various businesses.

The professional sector which also includes scientific and technical activities had the next largest borrowing requirement with a collective £4.5 billion lent to it and also saw the second-largest amount of individual bounce back loans granted with nearly 160,000 being granted.

Three sectors stand out above the rest when it comes to how much each individual business has borrowed on average.

Shops and stores in the retail sector had the highest individual average figure with £35,530 borrowed.

It’s hoped that April’s grand reopening and expected uptake in sales will help retailers be more successful in 2021 and insulate them from the negative effects when economic support measures are withdrawn later in the year.

This was followed by the restaurants, hotels, cafes, pubs and bars that make up the hospitality sector. It’s arguable that these businesses have had the toughest 12 months under coronavirus trading restrictions so it’s no surprise that their average individual borrowing is as high as £35,503.

The third highest might be more surprising as it’s real estate companies. They borrowed an average of £35,080 per loan and while a large amount of their trade has moved online – a lot still has to be done in person whether it’s viewing properties, meeting agents to sign witnessed documents, financial and legal issues or being present but socially distanced when an agent conducts a tour of their property.

At the other end of the borrowing scale, businesses in the education sector borrowed the least on average with £23,238 per loan granted.

The next lowest were Arts and Entertainment companies borrowing £24,906 each and Transportation businesses borrowing £25,667 per loan.

As the original and any topped-up bounce back loans start to come due for payment, we’ll have some idea in the coming weeks and months which sectors are best able to start paying off their support and which are still struggling to avoid liquidation.

Chris Horner, Insolvency Director with Business Rescue Expert, said: “The bounce back loans and other government backed support schemes have seen an unprecedented demand and take-up from small businesses, who may have had no other recourse to commercial finance.

“The early signs we are seeing in our own figures for small-company liquidations so far in 2021 are that already over 41% of companies entering liquidation have bounce back loans with an average balance outstanding of £37,350.

“We expected that the worst affected sectors such as retail, hospitality and construction would have had the most need for these funds and they will be the ones hoping for the quickest turnaround in fortunes now they can begin reopening and trading again.

“But there are no guarantees of success or even survival for any business right now.

“We’ve seen the corporate insolvency numbers start to rise again after being at historic lows and once support measures are withdrawn we can predict that they will rise even more as a result.

“As the economy opens up, there is light at the end of the tunnel for those businesses in difficulty that have utilised bounce back loans.

“The coming months liquidation figures are likely to give the clearest indication yet as to just how well small businesses will recover.

“No matter which sector a business operates in, they have options if they’ve taken out a bounce back loan and think they’ll have trouble repaying it.  By getting professional insolvency advice quickly, possibly before any potential problems appear, they will be in the best position to react and respond.”