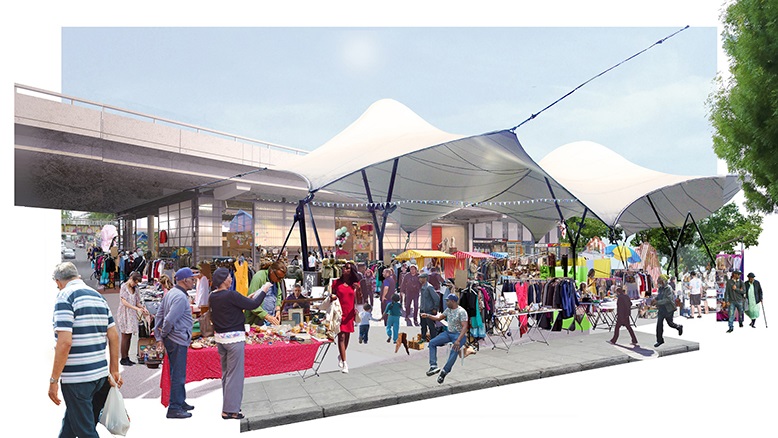 Plans for a £10m investment in the world-famous Portobello area, including a new arts centre, were unveiled today.

Film screenings, live music and theatre will be among the events be staged at the 1,000 capacity arts hub, which will also play an important role in the preparations for Notting Hill Carnival.
A new indoor market hall, new shops for independent retailers and studio spaces for small businesses and community groups form part of the scheme to breathe new life into the area under the Westway flyover where it meets Portobello Road.

Westway Trust, the charity which owns and manages the land, has pledged to give preference to local independent traders above chain stores to complement the vibrancy and character of the Portobello Market which is nearby and will be unaffected.

The new facilities will boost the local economy, creating 150 new jobs as well as apprenticeships and increasing market trading hours.

Redevelopment by the Trust will focus on the neighbourhood linking Ladbroke Grove and Westbourne Park.

More than 1,000 people, including residents, community groups and business responded to the 18-month consultation.

Architecture practice Stiff + Trevillion, which is based in Westbourne Grove and has experience of similar projects in North Kensington, worked with the Trust to produce the plans made public today.

Details of the scheme are as follows:

Proceeds from housing will help the Trust meet the overall scheme’s costs, which will also be funded by cash and borrowings.

Westway Trust Chief Executive, Angela McConville said “Portobello has a unique appeal as local people and the millions of visitors every year appreciate. It is this character and distinctiveness that we want to preserve and celebrate in our new proposals. We have listened to local people and their views are reflected in our plans to provide improved spaces to enhance the area’s cultural life and benefit the community as well as providing much needed affordable housing.”

Brendan O’Keefe, Managing Director, of Epic ELM C.I.C., a local youth service organisation, said “In this scheme I see a variety of different opportunities for young people to get their careers going and I hope we can get involved in supporting that work.”

Chris Garland, Vice Chair of Swinbrook Residents Association, said “With the re-visualization/re-packaging of the Portobello Green/Westway development plan, The Westway Trust are to be congratulated I am delighted to say, in having created something excellent and inspiring.

For not only have they created something that captures the sense and spirit of the area, but (and perhaps most importantly) they have brought it into the 21st Century! For this is a plan that acknowledges, but does not dwell on or live in the past! It recognizes change, and the need for it, and where the area is going.

It moves with the times, by creating something that re-invents, enhances and embraces the ‘Now’ in a way that will upgrade the area and its culture, in a manner that is long overdue. Of course there will be those who are against change, any change, but those who generally love, understand and live in this area, and look to the future, will recognize the style and visionary aspects of this wonderful new plan and the great benefit it will be bring to the people and business of this area.”

Micky P, from local arts festival Portobello Live!, said: “Portobello Live! is happy to be working with the Westway Trust, and having seen their plans for the redevelopment of Westway Estate around Portobello Rd, it’s clear they have listened to the community and will enhance the heritage of our much loved area. The future looks very exciting and will undoubtedly encourage a lot more people to visit!”

Jo Royce, Executive Director of Gate Theatre, said “West London is a real hub for arts and culture, so the development of a new and vibrant space for creative talent, right in the heart of Portobello, feels very exciting.”

A public exhibition of the Portobello proposals will be held 15th November –18th November and Sunday 20th November under the Westway at 1 Thorpe Close and is likely to be followed by a planning application at the end of the year. More information can be found on the Westway Trust website westway.org/Portobello.

Only 15% think HS2 is worth the money
Scroll to top