The Cleveland Pools Trust is delighted to announce the start of works to restore the historic pools in Bath, following a 17-year community campaign to save the Grade II* listed site.

Bristol-based Beard is leading the work on the restoration of Cleveland Pools, the oldest surviving outdoor public swimming pool in the UK, which was built in 1815 and is now regarded as a nationally significant site.

The project has the support of hundreds of people in Bath, many of whom have recorded their happy memories of summers spent poolside, of learning to swim, early romance and just how cold the water was.

However, the £6.2m project poses some significant engineering challenges for Beard, which will bring its extensive experience in the heritage sector to the development, as the site is only accessible for vehicles by river.

Machinery, building materials and equipment required to carry out the major refurbishment work on-site will have to be loaded up at the nearby Avon Rugby Club, which is being used as a base, and carried up-river on a pontoon pushed by a barge fitted out for the purpose.

Anna Baker, project director for Cleveland Pools Trust said: “After 17 years of community action, starting construction work is a hugely significant moment which we’re all so happy to see.

“We’ve had fantastic support to get us this far, particularly from our main funder, the National Lottery Heritage Fund, but still have some way to go with £400,000 still to raise. We are looking forward now to seeing the restoration take shape, to be complete by summer 2022, when the community that enjoyed the benefits of this wonderful facility in the past, will be able to once again.

“Beard has brought a great deal of expertise to the project and a real appreciation of what the facility will be used for once it’s complete, which is very important for us in a construction partner.”

Among the work to be carried out is the restoration of two pools – the crescent-shaped main pool for adults and a smaller, shallower pool for children. There will also be refurbishment of the largely unaltered Grade II* listed buildings, the central cottage upgraded to be used as a main entrance and pay point, with the first floor to become a caretaker’s flat.

Work is due to be completed in time for swimmers to return next summer, for the first time since 1984 and will be accessible for all, both physically and financially.

Mark Tregelles, Beard project manager said there have been some unusual logistical challenges in terms of accessing the site and starting the job.

He said: “We recognise how culturally significant this development is for the community, and wider region, not only as a Grade II* listed building but also as a space for the community to use and enjoy when it’s complete. We are working closely with the Cleveland Pools Trust to realise their vision to make it an accessible and fun place to be for all users, and also to reflect the rich history behind the nationally important site.

“But it is certainly a different prospect for Beard as we’ve had to do a lot of work in preparation to establish a base down river at Avon Rugby Club, which we will use as a loading site to get everything we need onto the barge and sailed up to the site.

“There can’t be many building projects today which require access by boat. So, we’re pleased to be starting after months of planning, and to draw on years of experience working on culturally important buildings to ensure delivery on time for the community.”

The project was set to start in March last year when the covid pandemic struck and led to delays and increased costs. In recent months the Pools has enjoyed exceptional national support with additional funding being provided by the National Lottery Heritage Fund, the DCMS Capital Kickstart Fund, and emergency grant aid from Historic England.

The project includes a community engagement and volunteering programme with dedicated resources to deliver the Activity Plan, which aims to engage a wide and diverse section of the local community in meaningful projects. So far this has included delivering a tailored employability programme to give students the experience of working on a real project, running intergenerational activities about the history of the pools and engaging volunteers to create a walking trail to site as part of the green travel plan.

The overall project costs for the period 2019 to 2025 are now just over the £8 million mark with the Trust needing to raise a further £400,000 over the next 18 months to deliver all outcomes.

Plans for the refurbishment of the site include: 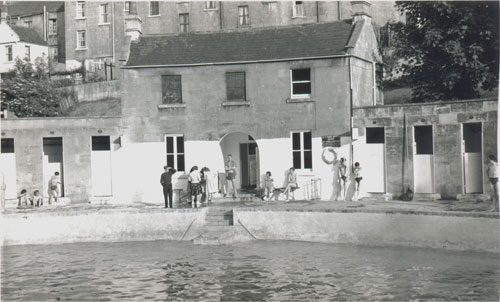 About the Cleveland Pools

The Cleveland Pools are the UK’s oldest surviving public outdoor swimming pool. First opened in 1817 as a river fed pool, followed by a colourful history through the Victorian era to its heyday in the 1970s, until competition from the newly opened indoor Bath Sports and Leisure Centre saw the Cleveland Pools close to swimming in 1984. To survive, it was for a short time used as a trout farm, but was threatened with demolition as an alternative to repair. In 2003 Bath and North East Somerset council, who owns the site, put it up for sale, and it was added to the English Heritage Buildings at Risk Register.

Thanks to the determination of local people, the Cleveland Pools Trust (CPT) was formed in 2004 to rescue the pools from dilapidation. In 2006 its listed building status was raised from II to II* as The Pools were considered of ‘particularly important… of more than special interest.’

Thousands of supporters from far and wide, many of whom have happy memories of swimming here before closure, joined the campaign and today the CPT has many highly valued volunteers who give their time to support the project. The Pools are now being restored for the community of Bath and beyond to enjoy.